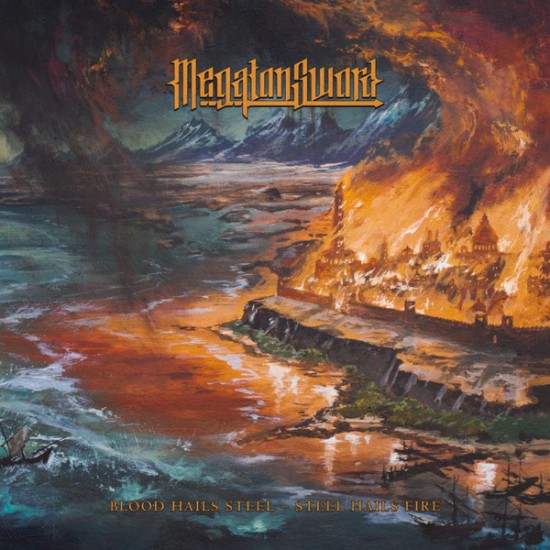 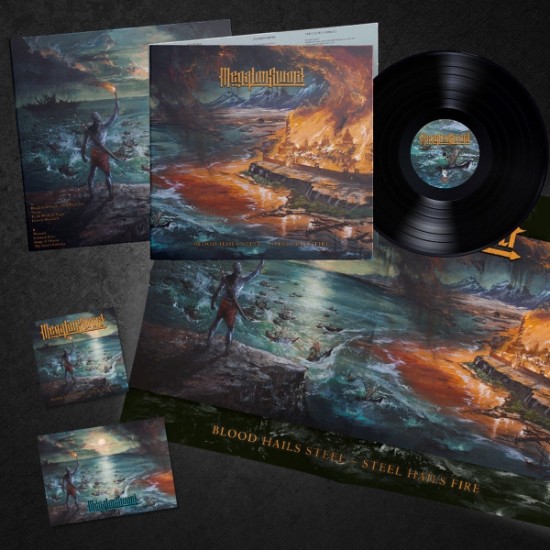 Hailing from Niralet once again, Epic Heavy Metal Warriors Megaton Sword return with 8 new tunes.
Vinyl comes with sticker and wallpaper.
DYING VICTIMS PRODUCTIONS is proud to present MEGATON SWORD's highly anticipated debut album, Blood Hails Steel - Steel Hails Fire.
It was but November of last year when MEGATON SWORD unleashed their glorious debut EP, Niralet, via DYING VICTIMS. Arriving fully formed, virtually without warning - no prior demo recordings existed, at least not publicly - this Swiss quartet evinced an ages-old sound that was wise (and wizened) well beyond their young years. Already, MEGATON SWORD knew the mystery of steel…and wielded it with a startling confidence. And no one knew just how high they could fly, only that they were just getting started.
Now, with the arrival of their imminent debut album, Blood Hails Steel - Steel Hails Fire, MEGATON SWORD are marching into the halls of greatness, with no one to stop them. Retaining the same, well-named lineup - vocalist Uzzy Unchained, guitarist Chris the Axe, bassist Simon the Sorcerer, and drummer Dan Thundersteel - MEGATON SWORD maximize the strengths of the EP and then some, revealing new twists to that mystery of steel whilst retaining the charisma and crunch that endeared them to the true-metal underground the first time around. Indeed, Blood Hails Steel - Steel Hails Fire is aptly titled, almost ridiculously so: this is true-as-steel HEAVY METAL drunk on high fantasy and the enduring themes of conquest and valor, triumph and tragedy, but rendered in a form even bloodier and possessing more bravado. It's also more dynamic, maximizing drama between notes and from one passage to the next, each movement a narrative crucial to their conquest. Those notes are suitably wrapped in a production that's powerful in its clarity and pure in its intention, revealing MEGATON SWORD as both craftsmen and warriors, and never sacrificing grit on the altar of perfection (or vice versa).
Above all, Blood Hails Steel - Steel Hails Fire is comprised of legitimately awesome SONGS that stick in your head immediately, even when traveling upon a winding, suitably epic path. Each one of the eight contained herein feel far vaster than their succinct track times suggest; credit is thus due to MEGATON SWORD's firing-on-all-cylinders songwriting. Or perhaps it's the patient pacing they employ, which they first revealed on Niralet, allowing each bellow of bathos and push of pathos to ring out and as true as possible; perhaps it's the passion and machismo dripping from every element, every drop of blood, sweat, and tears tangible and intense; or once again, perhaps it's the band simultaneously sounding timeless and fresh, safely evading both rote "retro" throwback and over-modernity in kind, and doing it more effortlessly than ever. Either way, MEGATON SWORD have delivered an album both bold in its ambition yet urgent in its delivery - truly, the thing that classic debut LPs are made of.
With Niralet, we made references to '80s Manowar, Warlord, and Manilla Road as well as early Running Wild and Nasty Savage, but with Blood Hails Steel - Steel Hails Fire, MEGATON SWORD truly sound like no one but themselves: the growth is palpable, but not once overextended. And graced again with unforgettable cover art courtesy of Adam Burke, one of the best debut albums of the year is ready to be wielded!
TRACKLISTING:
Side A
1. Blood Hails Steel - Steel Hails Fire
2. Verene
3. In The Black Of Night
4. General Bloodlust
Side B
1. Wastrels
2. Crimson River
3. Songs of Victory
4. The Giver's Embrace
Based on 0 reviews. - Write a review
17.99€
Price in reward points: 180 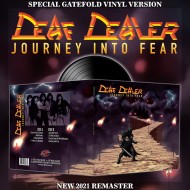 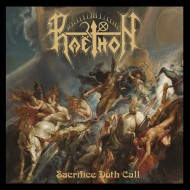 WINTERHAWK - Electric Warriors Vinyl LP
WINTERHAWK from San Francisco, was a Native American hard rock band, founded by Nik Alexander, singer and guitar player extraordinaire. The band start..
16.99€
Add to Cart
Add to Wish List
Buy Now Question
We use cookies and other similar technologies to improve your browsing experience and the functionality of our site. Privacy Policy.