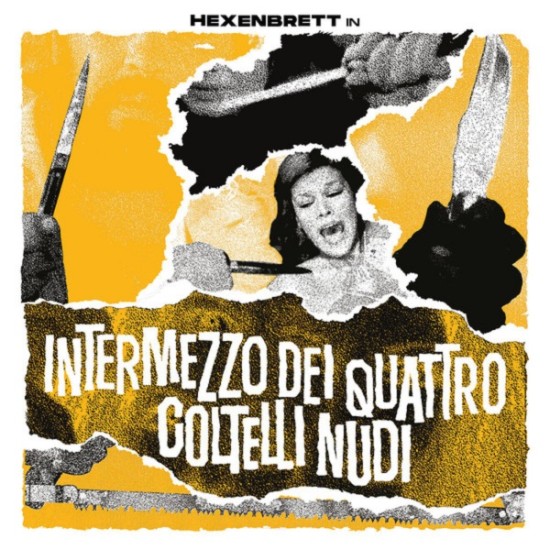 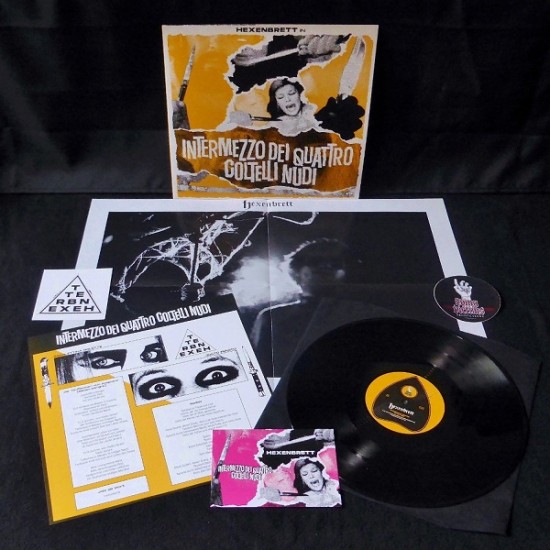 HEXENBRETT - Intermezzo Dei Quattro Coltelli Black Vinyl MLP
Text by Dying Victims official website.
It was but May of the cursed year of 2020 when TTERBNEXEH truly came into their own with their shockingly masterful debut album, Zweite Beschwörung: Ein Kind zu töten, courtesy of DYING VICTIMS. While the enigmatic duo of Josto Feratu and Scarlettina Bolétte had definitely turned heads with Erste Beschwörung EP in 2019, their debut album’s idiosyncratic kaleidoscope of Varathron, Jean Rollin, Danzig, Goblin, and Van Halen emerged as completely unique and unlike little else around.
Predictably unpredictable, TTERBNEXEH return with a crazed ‘n’ crazy EP that’s the result of canceled concerts and tours: the four-song Intermezzo dei quattro coltelli nudi. As suggested by its titled, the record is no “Beschwörung” but, rather, an intermezzo. Because, for the first time in the brief history of TTERBNEXEH, this EP does not feature performances by Josto Feratu or Scarlettina Bolétte. Instead, the tracks were recorded by what had been the live line-up for 2020, but of course under the watchful eyes and ears of the clandestine couple.
Suitably, Intermezzo dei quattro coltelli nudi strays some from the TTERBNEXEH sound so far revealed whilst etching the band’s twisted identity even further. With all songs and lyrics written by the duo of Feratu and Bollétte – except for a reverential cover of the early Misfits track “Return of the Fly” – the band’s original material here displays new facets in TTERBNEXEH sound: heavier, weirder, more atmospheric and more aggressive. It’s basically more of everything and the most accurate presentation of The Sound Of the Bloody Iris to date, and bloody fucking good no matter how you cut!  While TTERBNEXEH previous full-length record featured unexplainable additional sounds in the background of the tracks, the material on Intermezzo… had to be re-recorded many times as things got lost continuously. It seems as if Feratu and Bolétte are still haunted from their past… But hark! Intermezzo dei quattro coltelli nudi is no taster/teaser of the second TTERBNEXEH full-length. Those mysteries are only known to the duo.
Heavier, weirder, more atmospheric and more aggressive - The Sound Of the Bloody Iris!