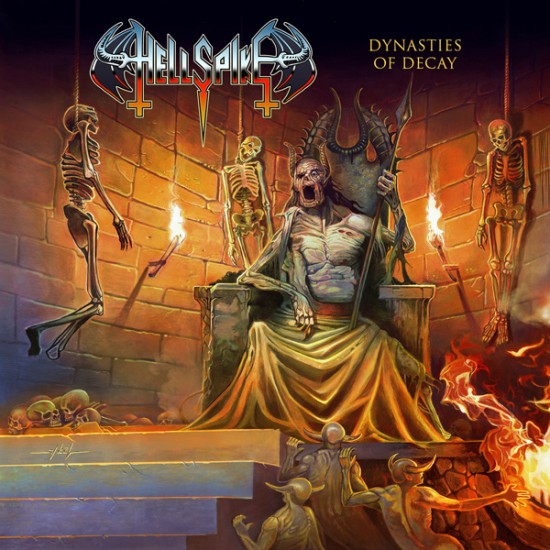 Only a year after their debut saw the light of day, the Portuguese speed/thrashers HELLSPIKE strike back with their sophomore album. "Dynasties of Decay" will be out on November 19th, together with the new releases of KÖMMAND, HOME STYLE SURGERY, GRAVETY and IN AEVUM AGERE, as well as "Compendium of Metal Vol. 14" compilation. These veterans of the Lisbon metal scene are influenced by the NWOBHM sound, but most of all by the German speed/thrash bands from the mid '80s. Their songs are full of relentless and furious riffs, but also melody, expressive guitar harmonies, creative arrangements, inspired solos and choruses that will easily stay in your head. Don't hesitate to give them a listen if you're into IRON ANGEL, NECRONOMICON, SODOM, old RUNNING WILD, ANGEL DUST, GRAVE DIGGER, WARRANT (Ger.), VIOLENT FORCE, MINOTAUR, LIVING DEATH, JUDAS PRIEST and M.A.R.S.!

TRACK LISTING:
1. Dynasties Of Decay
2. They Live
3. Gone To Waste
4. Hegemony Defied
5. Divide To Rule
6. On Through The Times
7. Ruthless Invasion
8. Lost Reality