ARE WE EVIL? - A Tribute To Diamond Head Black Vinyl LP 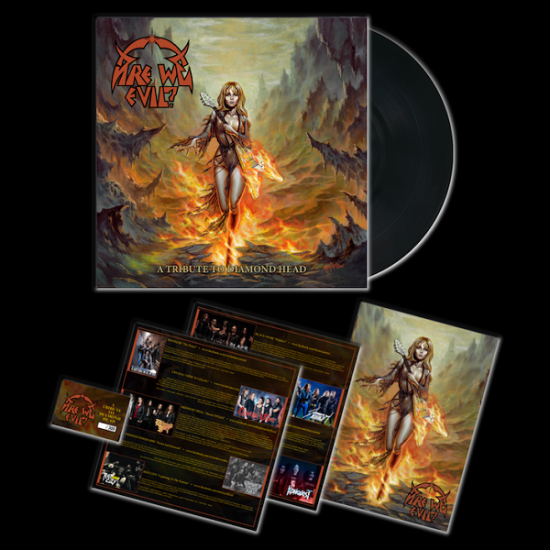 Out Of Stock
ARE WE EVIL? - A Tribute To Diamond Head Black Vinyl LP
DIAMOND HEAD honored with the first tribute album, "Are We Evil?"
The first ever DIAMOND HEAD tribute album entitled "Are We Evil?", will be released in the first months of 2022. The compilation includes 9 heavy metal classics originally recorded by one of the most important and influential bands of the genre, DIAMOND HEAD, performed by young acts from Europe and North and South Americas: AMBUSH (Sweden), BLACK MASK (Mexico), CRYSTAL VIPER (Poland), KONQUEST (Italy), MIDNIGHT SPELL (United States), POUNDER (United States), RIOT CITY (Canada), TRAVELER (Canada) and TWISTED TOWER DIRE (United States).
The album has been produced and mastered by Bart Gabriel, who except working with acts such as SATAN, CIRITH UNGOL and SORTILEGE, previously produced RIOT, EXCITER and ANVIL tribute albums. Cover artwork of the album has been painted by Mario Lopez, Guatemalan artist who previously worked with acts such as CRYSTAL VIPER, EVIL INVADERS and TOXIK.
"Well done to all the bands that have put time and effort into making this happen. It's the first time a bunch of DIAMOND HEAD songs have been covered for an album apart from METALLICA obvs. My favourite is AMBUSH's version of "Canterbury". It's an awesome modern version and a great new arrangement. The singer does it proud. It's so good it makes we want to revive the song for the current DIAMOND HEAD shows as we have not played this live since 1984! I also really like the new versions of "The Prince", "It's Electric", "Streets Of Gold" and "Sweet & Innocent". It's a real success for me, I am very surprised and flattered, for some reason I wasn't expecting this kind of quality" comments DIAMOND HEAD guitarist and founder, Brian Tatler.
"It was truly an interesting project, and it was super exciting to put this album together. Sure, many Metal fans immediatelly think of METALLICA when you mention DIAMOND HEAD, but there's so much more there! They have an amazing back catalog, and they're without a doubt one of the most important bands when it comes to Classic Heavy Metal, and Metal in general" says Bart Gabriel. "I'm also very happy that the album was officially „blessed" by Brian Tatler and his crew – he's one of my favorite heavy metal guitarists, his riffs are absolutely stellar. That's why the witch from "Am I Evil?" which you can see on the cover of the album (and who was inspired by the Hammer Films icon, Ingrid Pitt!), is holding Brian's iconic Flying V guitar!" he adds.
Limited to 200 numbered copies in black vinyl, this edition includes:
- Insert with liner notes
- A3 poster
- Hand numbered certificate card
TRACK LISTING:
Side A:
1. TRAVELER - The Prince
2. CRYSTAL VIPER - It's Electric
3. MIDNIGHT SPELL - Streets Of Gold
4. TWISTED TOWER DIRE - Sweet And Innocent
5. RIOT CITY - Lightning To The Nations
Side B:
1. BLACK MASK - Helpless
2. AMBUSH - Canterbury
3. POUNDER - Dead Reckoning
4. KONQUEST - Call Me